You are here: Home / Beverages / Family Friendly Drinks / How Is Dominican Rum Made? 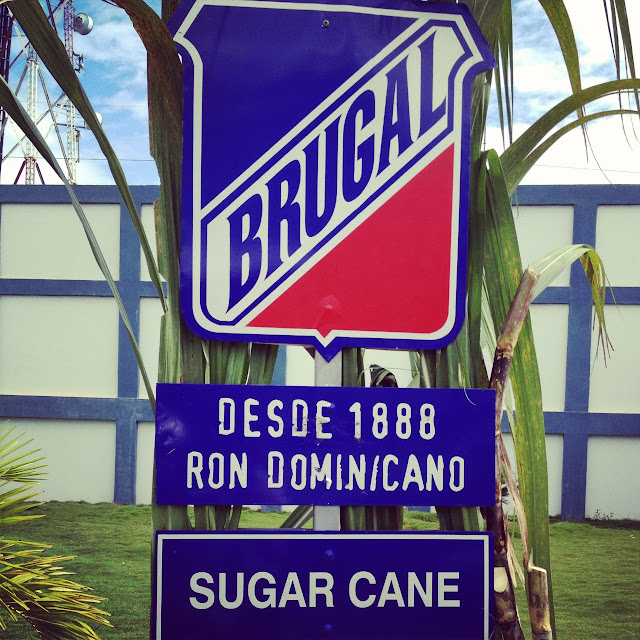 On our trip to the Dominican Republic, one of the highlights was a two-day visit to the Brugal distillery and aging facilities. Known as THE Dominican rum of choice worldwide, Brugal has been producing rum since 1888. Created by Andres Brugal Montaner, originally from Spain and arriving to the Dominican Republic by way of Cuba (where he learned all about the rum making industry), Mr. Brugal created what today is not only a rum factory, but a family tradition. Today, we’ll be sharing a little about the process of how rum is made from start to finish, as well as sharing some tasting notes of our favorite rums.

STEP ONE: Trucks filled with molasses come from sugar cane plantations local to the region. This one is from San Pedro de Macoris, where most of the sugar cane in the Dominican Republic is grown. It takes about 12 months to grow a full plant and they only harvest the plants for  5 years. The first four years it’s cut by hand leaving 4-5 inches of the plant in the ground, from where it can regrow. The Brugal family does not own any sugar cane plantations, preferring to purchase the molasses from local farmers and supporting the province’s economy. These molasses will ultimately become 95% refined alcohol. 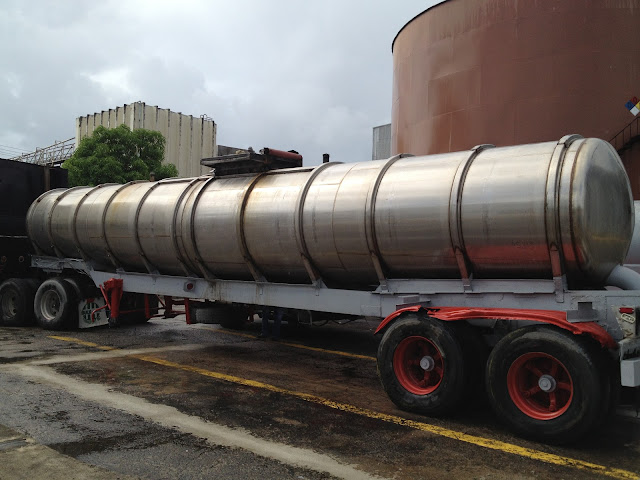 STEP TWO: Now you’re wondering how could they possibly move along molasses through the entire process? Well, Jose Adan Ferreira, Director of Processes at Brugal, explains that the molasses is mixed with pure local water from the mountains of San Pedro de Macoris and yeast is added to them. This not only makes the molasses an easier fluid to work with, but it starts the fermentation process with the yeast. Then, they are transferred into fermentation tanks for up to 40 to 44 hours, where it reaches an 8% alcohol level. 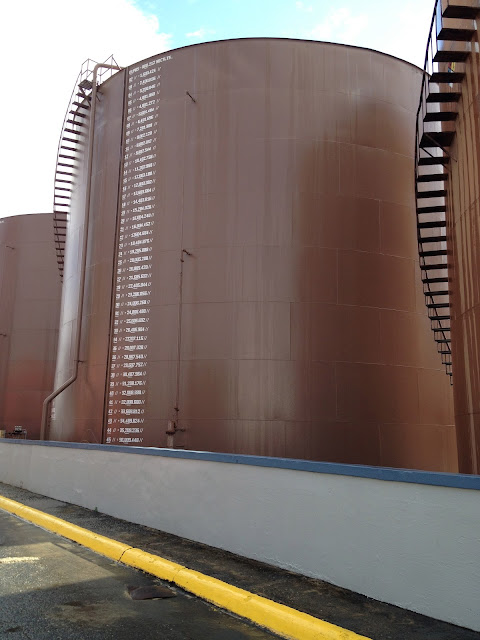 STEP THREE: The molasses start their long process to become 95% alcohol and it begins with going through a series of pipes, tanks, and filtration systems. In easy terms and with the aid of the picture below (which seems even more confusing) the fermented molasses start being distilled with the aid of steam/vapor in stainless steel tanks with separate columns. Imagine that each column is set at a specific height of the tank and when a specific dense alcohol vapor reaches it’s appropriate column, it leaves the tank. This is done to remove any impure or unneeded alcohols. 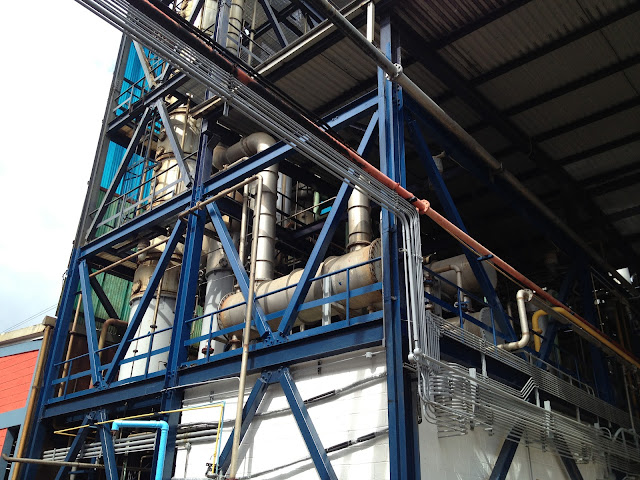 STEP FOUR: The distillation process above creates a murky dark and totally not-safe for the environment liquid called “vinaza”. So what Brugal does to make it safe for the environment is that this liquid is placed in “digestor tanks” that with the help of bacteria, eat up all the organic matter in the vinaza and makes it safe to dispose. During this “digesting” process, bio-gas is created – which is used to run 40 to 50% of the distillation process! FYI: this process runs 24 hours a day, only stopping for national holidays! 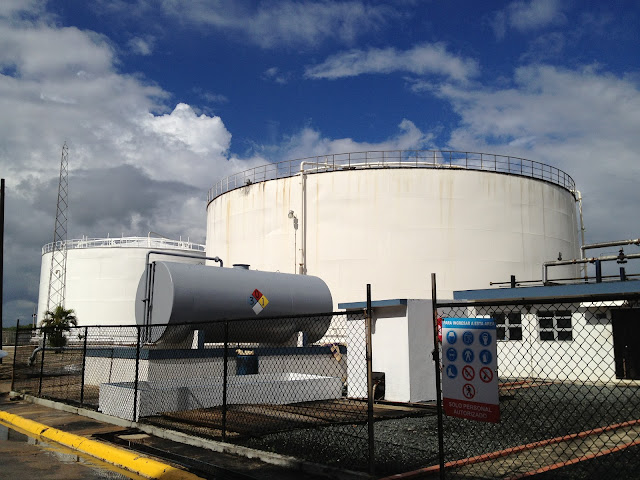 STEP FIVE: The end result is a clean alcohol (well, a combination of the preferred alcohols) that is then tested for aroma, harshness, residual sugars, acidity and more. Miledis Maldonado, Director of the Laboratory at Brugal,  explained to us what alcohols were desirable in the finished process. 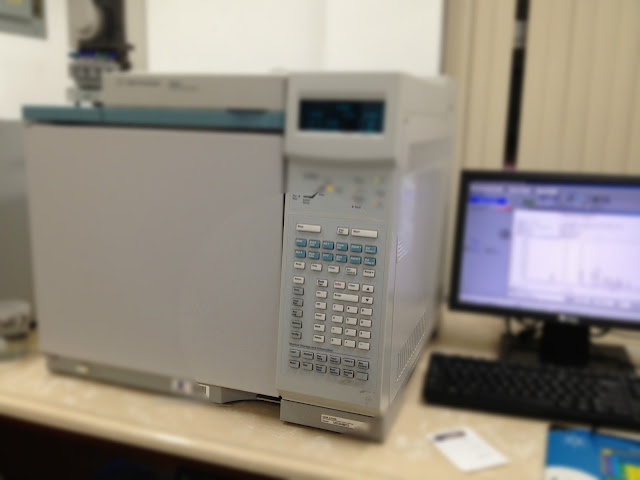 STEP SIX: Trucks are then filled up with the 95% alcohol from the distillery with a security method on the trucks to assure the liquid arrives at its destination untouched. It travels from San Pedro de Macoris to Puerto Plata, where Brugal’s aging facility is located. The facility has the capacity to store 1.7 million gallons of liquid.  When it arrives, it is mixed with pure water from the mountains of Puerto Plata (this water has been previously filtered to remove all minerals) to reach a 65% alcohol strength – the ideal strength to start the aging process. 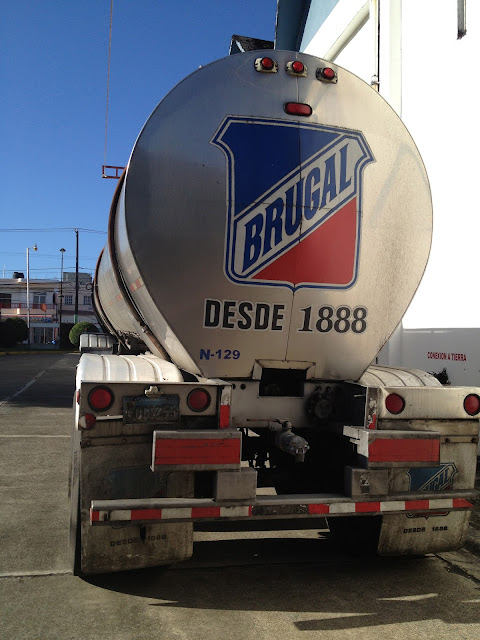 STEP SEVEN: With more than 14 warehouses and about 250,000 casks, the Brugal aging facility is a sight unlike any other. The casks are acquired from companies such as Jim Bean and Jack Daniels and are made from different woods: white american oak, cherry, red oak, and others. The variety of wooden casks and the years aged is what makes each rum in the Brugal line different. After the first aging, it is filtered to remove all that char particles (obtained from the inside of the casks) and transferred to blending tanks (we weren’t allowed to take pictures at this point). 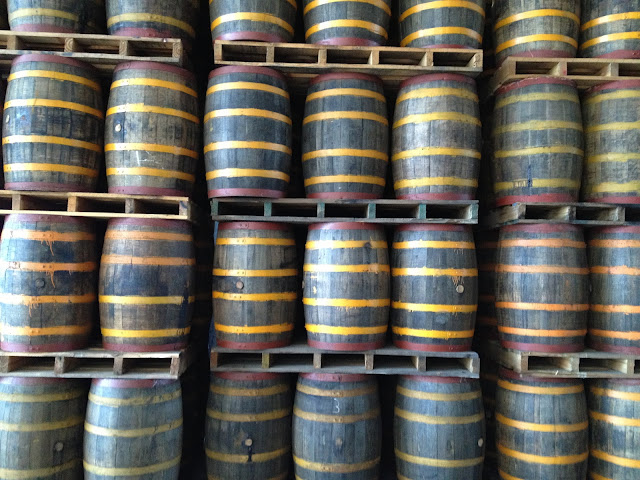 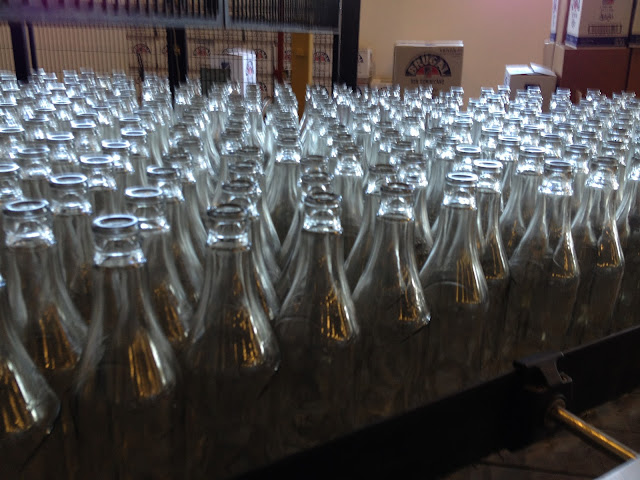 STEP NINE: Bottles are filled, labeled, capped, and packaged into corresponding boxes. The original netting some bottles have is STILL done manually, with a row of men rhythmically placing the netting and boxing those rums. 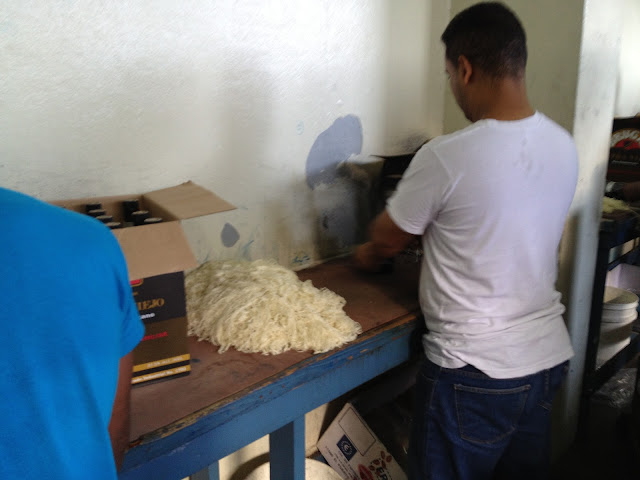 STEP TEN: And now, the fun part! We met up with Jassil Villanueva, a Maestro Ronero in the making. What’s a “Maestro Ronero” you ask? It’s the person that tastes each and every batch of rum before it runs through the bottling process. After it’s blended, a bottle is brought to one of the four masters and they approve (or disapprove it!) before it goes into the bottling plant. Imagine getting a job like that?! Well, sad part is that for you to be a Maestro Ronero, you need to be part of the Brugal family and this is how Jassil, a young twenty-something year old trainee daughter of a Maestro Ronero (who has himself been tasting rums for 22 years) is in the business! 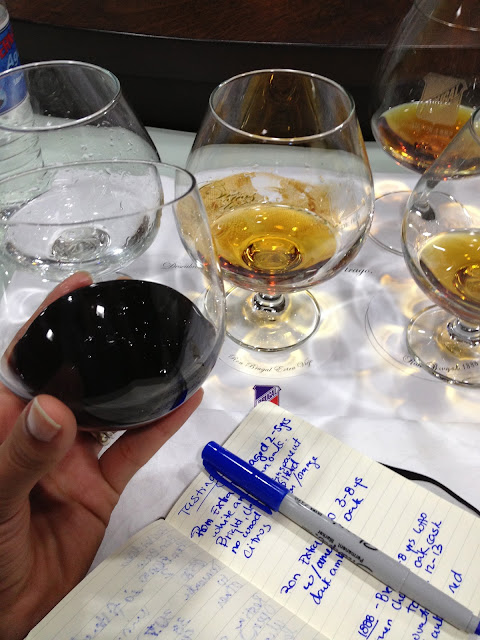 We spent an hour tasting some of the rums that Brugal creates, and here were are favorites: 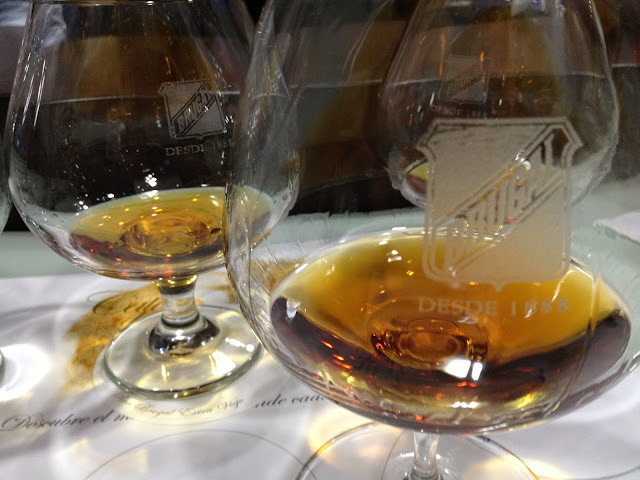 Disclosure: We were guests of Brugal on this all-expense paid trip. Our opinions, views, and photography are our own. Special thanks to Jessica and Mariolys for the attention to detail in the making of this rum-filled itinerary!