You are here: Home / Bread / Orange Cinnamon Raisin Bread
Before I left culinary school, I made sure to stock up on two things (we were allowed to purchase from our storeroom at ridiculously low prices): vanilla beans and SAF Yeast. It was the yeast we always used in class and I couldn’t bear to part with SAF. Today, I’m bringing you a post sponsored by the same company that makes SAF and has now developed a new and superior baking yeast, Platinum Superior Baking Yeast. 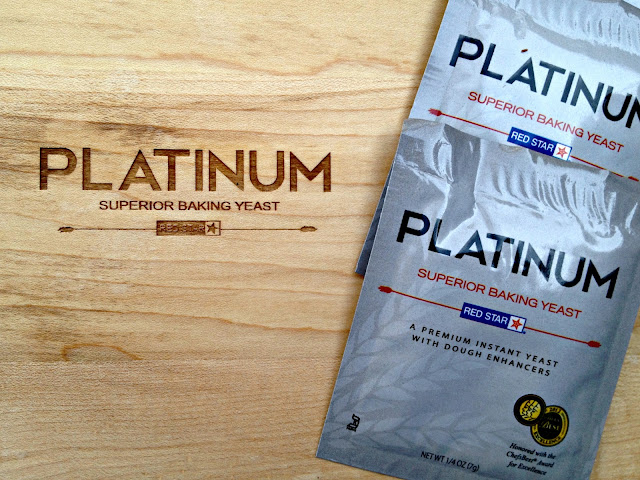 Here’s what I’ll tell you all about the new yeast from Red Star Yeast – Platinum Superior Baking Yeast. Think of your “regular” yeast as your good friend, the friend that’s always there, available for midnight phone calls when your boyfriend breaks up with you and always brings you cookies on Fridays. Now, when you think of Platinum, a premium instant yeast with dough enhancers, think of that other friend – the one that has the most awesome job in the world, juggles 3 kids and 20 after school activities. That friend that can wear red lipstick and actually look good doing so. The one that wears white after Labor Day and knows how to pull it of. Oh and that’s the same friend that makes croissants from scratch early in the morning to have for breakfast.
That’s what Platinum is like – it will make you look like a rock start on your first try! No proofing the yeast, no crazy temperatures, nothing. If you can read a recipe, you can make amazing bread [be sure to check out Red Star Yeast’s massive recipe index online!]. But you’ve gotta LOVE doing it, that’s the only thing. I LOVE bread. Heck, I don’t know why I didn’t start a bread blog.
During culinary school in our Advanced Breads class, we were asked what was your favorite part of bread/why you loved bread? Everyone loved the taste, the way it baked in the oven, etc. My response? “I love raw dough. I love the smell of fermentation, yeasty goodness. It’s the only raw batter/dough I taste. I don’t lick the bowl after making brownies and I hate raw cookie dough. But I will taste raw bread dough to check for flavor and salt.” — I know, crazy.

But enough about me, let’s talk about this new, sexy yeast. I can imagine her as a she, but if you want him to be a he, go right ahead. Here’s what the Red Star Yeast folks say about it:

From the Platinum website, here are a few advantages of using the new yeast with dough enhancers:

The one thing I loved the most about this yeast is that it made my crumb structure so light and tender; that’s what dough enhancers that I’ve previously used in professional kitchen do and it’s such a great feeling to have that same effect in my kitchen!

Don’t be afraid of yeast. And a little secret? If your bread doesn’t turn out, just turn it into bread pudding or french toast! Done. But I promise, it will turn out. Put some love into it and great ingredients and bake your little heart away. I decided to adapt this recipe for Apple Cinnamon Raisin bread using orange juice, and it was a hit at work. Slather it with butter or your favorite jam and call it the perfect weekend snack to have on the table and nibble on during the day!  Be sure to check out this video of one of my favorite bakers Gesine Bullock-Prado as she demonstrates Platinum.

Giveaway includes: samples of PLATINUM Superior Yeast, gorgeous pin-stripped apron, wooden cutting/serving board, and the winner will also be placed in a random drawing for a Platinum Kitchen Aid mixer! Entry Methods Below (leave a comment for each action completed!)

Disclaimer: This post is sponsored by Red Star Yeast and as always opinions are based on testing in my personal kitchen!