Whenever I come across a product, be it Dominican or not, I like to be open-minded. Innocent until proven guilty so they say. I came across these bars the week before the fair, running into them at the fair then. When at the fair, they had a prominent display of the bars and I had asked if I could purchase one of each, to which they said no. I asked if they were samples, and a big no followed. What are they? “Display pieces” she said. Display pieces…of chocolate….at a fair….I don’t get it. Do you? So, I left the fair and bought the chocolates somewhere else. 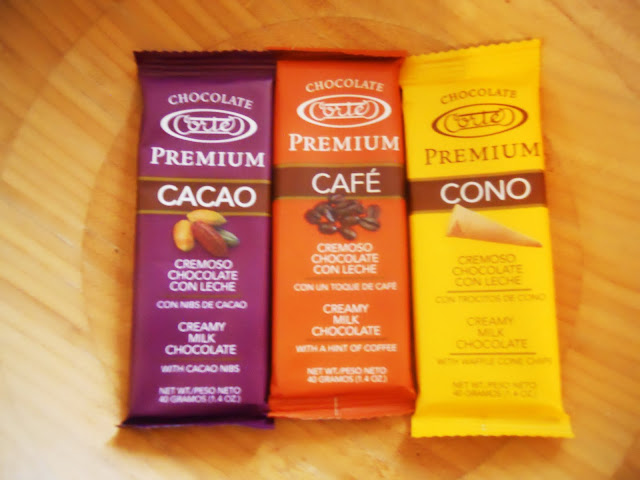 I love the packaging, very colorful and the information on it is just the right amount. Love the fact that it is in both Spanish and English, helpful when exported. On the back they list the Nutrition Facts and Ingredients, as well as Allergen Information. 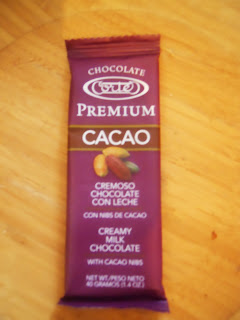 I enjoyed the Cacao Nibs in it, definitely added a much needed crunch. An all around good milk chocolate by flavor, but something I found in ALL Cortes Premium Bars was the fact of how badly tempered they were. Lack of temper sounds more like it; the bar had no snap at all. Nada. I’d like to think they are being transported in hot-cold-hot environments but these bars JUST came out, so that can’t be. 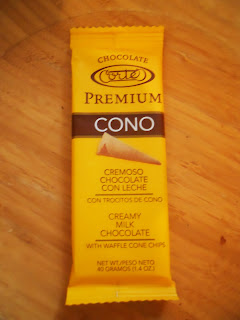 Waffle Cone chips throughout and they were crispy and delicious. Same problem with the temper and lack of snap, plus after reading the ingredients in all three of them I realized they ALL contained Almond Paste. Why would you ever put Almond Paste, such an expensive ingredient, in a bar that isn’t Almond flavored? Don’t even get me started with the fact that this limits their public due to nut allergies! Almond Paste isn’t needed (like Lecithin is) in chocolate making…so, I might need  to make a call or two and figure this out. 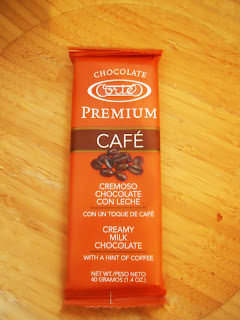 Being the coffee lover I am, I really enjoyed the taste of this bar. A little grainy (maybe the direct addition of espresso powder?) but still, very delicious. God, I just wish this bars were tempered correctly! They’d be fantastic! Oh, this one also has Almond Paste. No clue WHY.

What is Chocolate Tempering? In simple terms, chocolate tempering is preparing chocolate to be used to make bars, decorations and confections and having that chocolate have certain aesthetic properties. Tempering is basically done by melting chocolate and then cooling it to specific temperatures. I’m not going to get into specifics, but each chocolate

What are the most common Tempering Methods?  Commonly known methods are Seeding, Tabling and Block Tempering. Seeding is done by melting chocolate over a double boiler and then adding “seeds” of tempered chocolate (the one you originally started with) until you reach the specific temperature. This is my preferred way of tempering: simple and ease clean-up. Talking about clean-up, next comes Tabling. Tabling is done by pouring melted chocolate onto a marble block and with a spatula cool it in long motions. Not only is this extremely messy, it takes practice and honestly, why go through all the trouble when you can easily do it in a contained bowl? Tabling is not my thing and I try to stray away from it. Oh, I also don’t know of many home bakers that own a marble block in their kitchen. The last one is block tempering and this is done with big amounts of chocolate. Melted chocolate is placed in a large hotel pan and then a block of tempered chocolate is dumped in and slowly, this tempered chocolate will temper you melted chocolate.

You might be saying…but what does “tempering” really do!? This is the best answer I could find online, without having to mash my head and try to explain crystals myself.

Recommended Readings by Chef Peter Greweling
About Peter Greweling: I had the great opportunity to be taught by the Master himself! He is a professor of Baking and Pastry Arts at the CIA and a Certified Master Baker. One of my favorite classes and professors, Chef Greweling is a genius in the area of Chocolates and Confections and his books are true bibles to go by. If you want to understand the why, what, and how of sugar, chocolates and anything confections, buy the first book listed beneath. If you’re more interested in making awesome confections, without so much scientific instruction (but still learn the why of what you are making), get the second book listed. You won’t be disappointed!

Chocolates and Confections: Formula, Theory, and Technique for the Artisan Confectioner

Chocolates and Confections at Home with The Culinary Institute of America