Hello and Welcome! I’ve wanted to share this recipe for a while now  and since today is Tuesday (Baking 101 on the schedule), I thought what better way to start this section with a recipe I developed a few summers ago? This recipe was a submission to a Splenda contest for Latin American Desserts and althought I did not win a grand-prize, I won a gift pack of Splenda products: flavored Splendas, Brown Sugar Splenda, Baking Splenda and tons more! I later entered it in a local newspaper contest while on extern in Colorado Springs and won a $100 gift card for groceries! So this recipe is the gift that keeps on giving!
Majarete is typically made in smalls cups and is a corn-based custard, served with a sprinkle of Cinnamon for that extra boost of antioxidants! Since everyone loves “pies”, I adapted the custard to fill a cookie crust with and baked it. Served with mango and ginger slices, nothing says Welcome Spring! than this bright dessert! 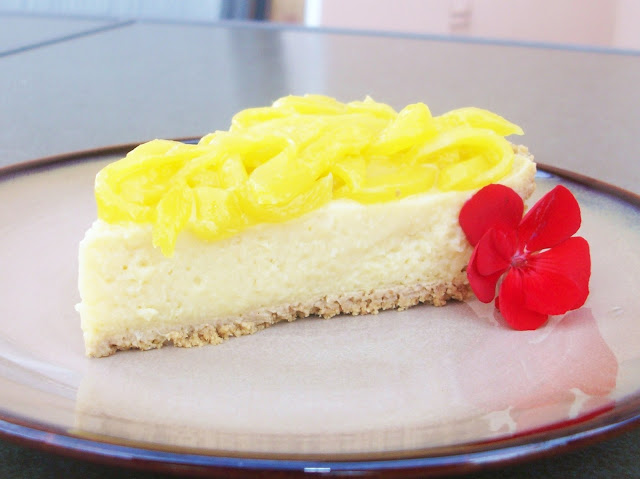 Makes 1 pie, or 8 portions
Preparation time: 30 minutes
Refrigeration time: 2 hours
Ingredients
1 ¼ cups of fresh corn
1 ½ cups of canned sweet corn
¼ cup of Splenda* granulated sugar
1 cup of coconut water
1 cups of fat free milk
1 ½ cup of evaporated fat free milk
1 tablespoon of white vanilla extract
2 envelopes of unflavored gelatin
1 pre-made vanilla reduced fat cookie crust
1 cup thinly sliced ripe mango, approximately 2 medium-sized mangoes
1 tablespoon of fresh grated ginger
2 tablespoons of granulated Splenda* sugar
Preparation
1.      Cut the corn kernels from the cob and mix with the canned corn. In a small saucepan, mix the corns with the coconut water, simmer until liquids evaporates to half.
2.      Meanwhile, mix the milks and vanilla. Add to the saucepan already with the corn and let simmer for 4 minutes.
3.      Let cool a bit and mix in a blender until the kernels are dissolved. Add the gelatin and pour into the pie crust.
4.      Refrigerate for about 2 hours, or until firm.
5.      While the pie is firming, place the sliced mango, fresh ginger and 2 tablespoons of Splenda granulated sugar in a small saucepan until tender. Pour over pie and serve decorated with fresh mango slices.
*I used Splenda but you can use any sugar you desire!
What’s your go to recipe? Have you ever won a food contest? Happy Tuesday Everyone!
« Tool Spotlight: Balloon Whisk
Wordless Wednesday »